Eggs and sperm are special cells for many reasons, but one of the characteristics that sets them apart is that, unlike other human cells, which have two copies of 23 chromosomes, one from the mother and one from the father, these sex cells, or gametes, have only one.

Previous research, led by Michael Lampson of Penn’s School of Arts & Sciences, has shown that these chromosomes don’t get passed on to gametes by chance; certain factors can tip the scales, making it more likely that one of the two copies will be passed to the next generation.

In a new paper, Lampson and colleagues uncover a force at work to balance the scales during meiosis, the cell-division process that gives rise to gametes, bringing the odds closer to 50-50 that a particular chromosome will get into a viable egg.

The work, published in the journal Cell, finds that, while a mechanism exists to give certain chromosomes the upper hand during meiosis, a separate, parallel pathway acts to suppress that advantage. Proteins that act in the two pathways appear to be in an evolutionary arms race, the researchers say, potentially to avoid the possibility of biased chromosome inheritance leading to mistakes and abnormalities in eggs, such as aneuploidy, or having an abnormal number of chromosomes, which can result in birth defects.

“If we think of these chromosomes that are getting in the egg as being selfish, selfish implies that they’re maximizing their own transmission at some cost to the organism overall,” says Lampson. “If there is a cost, then there might be other genes under pressure to suppress the selfish ones or suppress that cost.”

The current work aimed to look for that suppressive pathway, building on a 2017 paper in Science in which Lampson and members of his lab laid out the mechanism by which an asymmetry arises in the meiotic spindle, a structure composed of microtubules that pulls chromosomes to opposite sides of a cell prior to division. This asymmetry led to biases in chromosome transmission. They found that “selfish” centromeres, the part of the chromosome that attaches to the spindle, were more likely than “unselfish” centromeres to be able to detach and reattach to the side of the cell that was destined to become a viable egg rather than the polar body, which is typically degraded.

Then, in a 2019 paper in Cell, the researchers laid out more details of the process. They found that the selfish centromeres were able to bias transmission by recruiting certain proteins that destabilized attachment to the spindle, again increasing the chance of ending up in the egg rather than the polar body. These proteins played a role in enabling the centromeres’ detachment from the spindle.

“We had gained this understanding of how selfishness works,” Lampson says, so in the new paper, “we wanted to understand how suppression works.”

Earlier research had shown that some of the proteins acting on the centromere were evolving rapidly in various animal species. Lampson and colleagues hypothesized that this rapid evolution could be evidence of an “arms race” between selfish and suppressive factors, akin to what is seen in the immune system, which can quickly evolve to respond to changing threats from pathogens.

“It was surprising to find a whole bunch of rapidly evolving proteins functioning at the centromere because you would probably expect those to be highly conserved because they’re so important in cell division,” Lampson says. “But it’s a signature of the arms race, just like we see in the immune system: If selfish centromeres are going to cheat, there are likely proteins evolving to tamp down that suppression.”

The researchers already knew that effector proteins that bias chromosome transmission were recruited to the centromere by a route known as the kinetochore pathway. To find a suppressive pathway, they looked to heterochromatin, tightly-packed DNA, which is also known to recruit proteins to the centromere. To test whether the heterochromatin pathway might be balancing out the biasing effect of the kinetochore pathway, the researchers selectively modified an enzyme that acted in each pathway.

When they modified the protein CENP-C, disrupting the kinetochore pathway, they observed the bias between selfish and unselfish centromere decline, with chromosomes lining up more symmetrically in the cell prior to the completion of meiosis. In contrast, when they deleted the protein CENP-B, which is involved in recruiting proteins in the heterochromatin pathway, the asymmetry in the chromosomes became more pronounced, with selfish centromeres permitted to bias chromosome transmission to the egg.

“There seem to be these subtle changes at work,” Lampson says, “because both of these pathways are essential. You can’t kill the kinetochore pathway because it’s fundamental for cell division, but at the same time you want to reduce the opportunity for centromeres to be selfish. So evolution seems to be acting to respond to these simultaneous pressures.”

The findings illuminate the evolutionary battlefield present in our own bodies, Lampson says. “I think it’s really interesting that there are these selfish components of our own genomes that have essential roles. These very, very fundamental aspects of our cell biology actually reflect competing pressures.”

He and colleagues hope to continue to explore in follow-up work whether the potential costs of selfish factors can result in impactful mistakes in gamete production or other problems in meiosis. “Females don’t make very many eggs,” Lampson says, “so you would think each one would be precious, and we don’t want to make any mistakes. But mistakes sometimes occur; sometimes too many chromosomes get in. So, are mistakes somehow related to these selfish factors?”

Michael Lampson is a professor of biology in the University of Pennsylvania School of Arts & Sciences.

The study was supported by the National Institutes of Health (grants GM122475, GM124684, and HG010023) and the Funai Foundation for Information Technology. 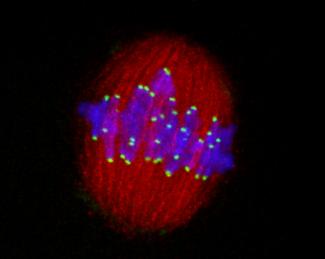