Dr. Ishmail Abdus-Saboor named a member of the 2020 class of Award in Pain Scholars 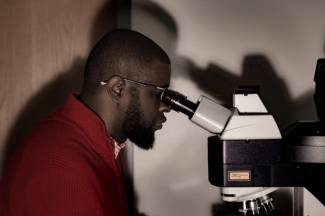 Originally posted on 9/4/2020 on the Rita Allen Foundation website. Read the full announcement on the here

The Rita Allen Foundation has named the 2020 class of Award in Pain Scholars, celebrating four early-career leaders in the biomedical sciences whose research holds exceptional promise for revealing new pathways to understand and treat chronic pain.

The selected Scholars will receive grants of $50,000 annually for up to three years to conduct innovative research on critical topics on the biological mechanisms of pain—including how the nervous system distinguishes between soft and harsh stimuli, what role the immune system plays in chronic pain, and what makes individuals at risk for chronic pain after a traumatic injury.

“By laying the foundations of biological knowledge, basic research holds the power to unlock new treatments, and improve our ability to safely reduce and treat chronic pain with far-reaching potential for individual and societal impact,” said Elizabeth Good Christopherson, President and Chief Executive Officer of the Rita Allen Foundation. “Together with Open Philanthropy, we are eager to follow the work of these emerging leaders in pain research as they advance a field rich with biological complexity and significance.”

Since 1976, the Rita Allen Foundation has awarded millions of dollars in grants to early-career biomedical scholars. These grants allow them to establish labs and pursue research directions with above-average risk and promise, including in the field of basic research on mechanisms that initiate and propagate pain signaling in the nervous system. Rita Allen Foundation Scholars have gone on to make transformative contributions to their fields of study, and have won recognition including the Nobel Prize in Physiology or Medicine, the National Medal of Science, the Wolf Prize in Medicine, and the Breakthrough Prize in Life Sciences.

Designed to recognize emerging scientists whose work holds high potential for uncovering new pathways to improve the treatment of chronic pain, since 2009 the Award in Pain has invested in 29 pain researchers at the early stages of their careers, enabling them to expand understanding of a complex neurobiological system with widespread societal impact.

The 2020 Award in Pain Scholars were selected by a committee that includes past Award in Pain recipients, as well as other leading pain researchers.

The members of the 2020 class of Rita Allen Foundation Award in Pain Scholars are:

Sarah Linnstaedt, The University of North Carolina at Chapel Hill

An Interview with Dr. Abdus-Saboor:

In conjunction with Open Philanthropy

My research focuses on a long-standing question—how does the nervous system encode a soft gentle caress versus a harsh painful stimulation? To accomplish this, I use neurobiology, computational biology, and mathematics to objectively measure pain—a sensory experience that is inherently subjective. Traditionally, researchers have applied sensory stimuli to the rodent paw and tried to infer the animal’s pain state based on the singular readout of whether the animal moved its paw or not. The problem is, animals will lift their paw to both innocuous and noxious stimuli; and with that sole measurement parameter, there is a high likelihood of incorrectly assigning the animal’s sensory experience. An innovation in our work is to use videography to take thousands of images per second to measure sub-second pain behaviors, and couple this with statistical modeling and machine learning to develop rodent “pain scales.”

What will funding from the Award in Pain allow you to do?

Individual susceptibility to pain is driven in large part by genetic variation. An interesting discovery my lab made while developing an automated pain scale is the identification of inbred mouse lines with unusual responsiveness to pain. Specifically, we identified mouse strains that responded to pain counter-intuitively; one mouse strain responded to painful touch like a soft stimulus, while another strain responded to soft touch like a deeply painful stimulus. These inbred mouse lines, which fail to respond normally to pain, may hold the keys to uncovering how populations of people have pathological pain sensitivity. This is significant because individuals with hypersensitivity to pain appear to have an increased risk of developing chronic pain. The Award in Pain will allow us to continue mapping behavioral responses at millisecond resolution in these outlier mouse strains across chronic pain states, with the goal of moving toward mechanistic detail.

How did you enter this career path? Was there anyone or anything that particularly inspired you?

I have been enamored with science since I was very young, and I knew that I wanted to be a scientist as early as third grade—despite never knowing any scientists personally. This early inclination to science was solidified in ninth grade when I set up a lab at home to investigate the regeneration rates of crayfish appendages when their drinking water was spiked with the herbal supplement ginseng. My parents had no qualms about a 14-year-old taking over an entire floor of the house with crayfish cages. They were, and continue to be, important sources of strength and encouragement for me. I won a first-place award in a citywide science fair for this project and since those high school days, a life in science is all I have ever desired.

What is your favorite science-related book?

As a postdoctoral fellow, I read the book The Challenge of Pain by Patrick D. Wall, which was published in 1982. In this book, Wall outlined his famous gate control theory of pain, which he developed alongside his colleague Ronald Melzack. While still theoretical at the time without experimental validation, the gate control theory of pain accounted for anecdotal and clinical findings related to spinal cord gating of pain, before messages reached the brain. Additionally, in the book, Wall described many case studies and clinical observations of pain that still baffle researchers to this day. As a scientist always looking for a challenge, reading Wall’s book convinced me that the pain field still has lots of mysteries to be uncovered and, just maybe, I could help solve a few of them.