First-year research is hands-on from the start

Freshman Daniel Ruiz de Castilla had never done research prior to coming to Penn this past fall. Now he’s assisting with a project that involves the careful synthesis of complex molecules called porphyrin dendrimers, entailing a detailed, stepwise process that can take months. The compounds could eventually find application in detecting pH changes in human tissue.

“One of the reasons I wanted to go to Penn was because everyone is doing something interesting and exciting,” says Ruiz de Castilla, who is from Baltimore and has been working in Sergei Vinogradov’s laboratory in the Perelman School of Medicine. “For a lot of science kids, that something is research.” 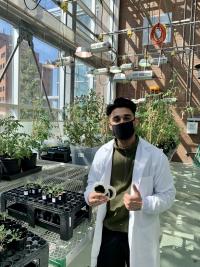 Thanks to the Penn Freshmen Exposure to Research in Biological Science (PennFERBS) program, Ruiz de Castilla got an early start on his own “something.” He is part of an inaugural cohort of 26 students who got involved in research labs within a few short months of beginning their undergraduate careers.

With the ultimate goal of relieving racial and ethnic inequities in the scientific, medical, and technological communities, PennFERBS was launched last summer in a collaborative effort between program director Mechthild Pohlschröder of the School of Arts & Sciences, Kristen Lynch of the Perelman School of Medicine, Keisha Johnson of the Pre-Freshmen Program (PFP), Pamela Edwards of the Penn College Achievement Program (PennCAP), and Bruce Lenthall from the Center for Teaching and Learning (CTL). The program focuses on promoting students from groups underrepresented in STEM, enhancing peer social support, and training students to take on leadership roles.

“Penn has been actively working to get students into labs really early on; that’s the motivation behind the PURM program,” says Pohlschröder, referring to the Penn Undergraduate Research Mentoring Program. “That’s a fantastic opportunity after your first year to provide students with an exciting authentic research experience; however, it also potentially is too late to retain some students, who may decide during that year that they want to leave STEM.”

Even the most exceptional students from underserved communities have often not received adequate exposure, if any, to scientific research during high school. PennFERBS focuses on connecting these students with jobs in research labs and appropriate mentors to instill them with the skills and confidence needed to succeed in STEM fields.

To read the complete story on Penn Today, click here 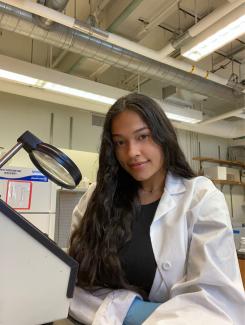