Black in Marine Science is building a community

Camille Gaynus had long felt at home in the water, and her parents passed on a love of nature as well. But her career path in marine science truly crystallized while she was underwater in Indonesia the summer before her senior year of college. SCUBA diving in one of the most biodiverse coral reefs on the planet, she was awestruck by the spectacular life forms all around her.

“It was life-changing,” says Gaynus, now a postdoctoral fellow in the Department of Biology in Penn’s School of Arts & Sciences working in faculty member Katie Barott’s laboratory studying algal biology.

Gaynus had a positive experience as a high schooler in Penn’s Teen Research and Education in Environmental Science program, and supportive mentors during her undergraduate years at Hampton University, including a professor who paid her to work on marine research. She also pursued a research opportunity with the Diversity Project, during which she obtained SCUBA certification and completed her pivotal trip to Indonesia. But, being a Black woman, there have been many times she didn’t get the encouragement she needed professionally. “You’re in a field that historically has not necessarily even wanted you to be there,” she says.

Now Gaynus and a group of colleagues are working to change that. With Black in Marine Science (BIMS), an initiative that began as a social media hashtag and has evolved into a registered nonprofit organization, they aim to showcase the expertise of Black marine scientists while stoking children’s curiosity in the ocean environment. Already they’ve launched two YouTube television series and built a growing network of scientists. Their future goals are even more ambitious.

“We wanted to have a space that says, ‘We’re welcoming you here,’” Gaynus says. “But we also want the scientific world to say, ‘Hey, check out what they’re doing over there.’” 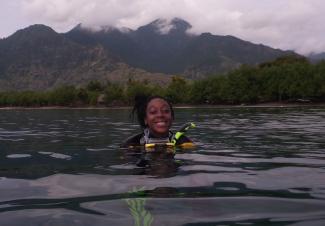